Another Monday, another incredible festival behind me. Seriously, what a week! I’m always wondering how to best sum up each festival experience and this year’s Dublin Writers Festival was so jam-packed with outstanding literature events that it seems quite a challenge to condense the wealth of impressions into just a couple of paragraphs. What I thought I’d do instead is put together the main writing tips I took away from listening to so many inspiring authors for those of you who couldn’t attend. Feel free to add any additional anecdotes or tips you heard during the week.

1. Writing routines
There seem to be as many writing routines as there are people putting pen to paper, however, most of the writers at the festival agreed that it helps setting yourself a few hours to work on your writing on a regular basis. ‘Skippy Dies’ author Paul Murray quoted Woody Allen’s famous line ‘Eighty percent of success is showing up’. No magic, just hard work then? Well, when it comes to how many hours writers spend writing each day the opinions differed quite a bit. Some set themselves a word limit (anything from 500 to a couple of thousand words per day), others went with hours spent at their desk (anything from 2 hours to working through whole nights seemed to be the norm for writers at this particular festival). So how long does it take to complete the average novel? While Paul Murray’s almost 700 page novel ‘Skippy Dies’ took about 7 years, others said they wrote their books in a couple of months.

2. Idea generation
While writing routines might be a good way of getting into the habit of writing and jogging your brain on a regular basis, Hanif Kureishi suggested that you can’t conjure up ideas like pulling a rabbit out of a hat at any time that suits you. He joked that his three teenage kids (none of whom apparently read books we learned, hm…) complained about seeing him staring out the window a lot, obviously ‘not working’, when he insisted he was in fact hard at work waiting for great ideas to come to him. For some writers this strategy seems to work best when actually not sitting at their desk and staring at a blank page, but by being out and about doing all sorts of other things. Just make sure you have your notebook and pen with you.

3. The Perfect Draft
So here is the bad news: the overwhelming majority of novels are not published after just writing one draft. The good news is: knowing that most writers have a couple of ‘practise novels’ under their bed or hidden away in a drawer completely takes away the pressure of wanting to come up with the perfect piece of writing at the first attempt. Most authors said it took several drafts or complete rewrites to wrestle the manuscript into a publishable format and it sometimes even ended up being a completely different book. The process of mulling over previously written passages and the constant reshaping of one’s work can also greatly help with finding the uniqueness of one’s own voice, which can only be a good thing. Most authors said that when they were on the right track with a chosen topic they felt instinctively excited about it and therefore knew it was working.

4. Editing Skills
A majority of the authors agreed that self-editing is one of the most important skills a writer needs to have. Keeping it simple, stripping the text down, learning to spot your own flaws and cutting out self-indulgent passages can go a long way in reducing your number of drafts to get to the final one. 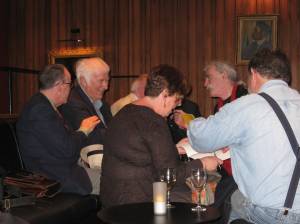 What I found heartening and endearing about the writers at this year’s festival was that even some of the more seasoned ones seemed relatively nervous on stage. None of them showed any arrogance about their achievements, on the contrary, they all insisted that the path to becoming a published writer can be rocky but also full of adventures and interesting discoveries, not least about oneself. Overcoming self-doubt and having faith in one’s own abilities seems to be an issue not only for those just starting out but also for more established writers. How reassuring then to hear many of the writers speak so openly and generously about their own insecurities and showing a vulnerability which was greatly appreciated by the audiences throughout the week. The Paul Brady event, for instance, was one the most memorable talks for me this year. It just goes to show how sharing personal thoughts about your life with a couple of strangers at a literature event can be so much more challenging than playing a gig in front of  thousands of people, but it can also bring performer and audience closer together.

There were so many inspirational moments to remember this year: Natasha Walter’ quiet optimism in the face of so much evidence of sexism in modern society and how she said she wished this talk could go on for longer. Susan McKay’s moving speech and her reading out They’ll Say She Must Be From Another Country by Imtiaz Dharker. Jennifer Johnston’s lively and insightful conversation with old friend Lelia Doolin (see my guest post on the Dublin Writers Festival Blog, otherwise written by the talented Elizabeth Murray). Yann Martel’s funniest festival quote of the week on how to deal with negative reviews (‘Today’s Evening Standard is tomorrow’s kitty litter’) and his project called What is Stephen Harper Reading? (according to him one of the functions of politicians is to be dreamers, how refreshing). The illustrated edition of Life of Pi is absolutely to die for (illustrations by Tomislav Torjanac) and Martel not only received the Man Booker Prize for it, but also got a handwritten note from Barack Obama. Festival director Sinead Connolly’s moving tribute to the late Eithne McGuinness and of course the jewel of an event that was the 40th anniversary celebration of Gallery Press last night. So much literary and musical talent gathered in one room made me feel slightly dizzy. Just as well it was the closing night of the festival. It couldn’t have been a more perfect ending to such an extraordinary week of writers and readers.

My most cherished of all the festival memories was the musical version of Michael Hartnett’s Dán do Lara, 10/Poem for Lara, 10 composed by Bill Whelan (who played piano on the night) and sung live by Julie Feeney. This is possibly the most beautiful poem I’ve ever heard. I just can’t get over how perfect it is. Sigh.

Finally a huge thank you to the festival team, especially Lisa-Marie (who contributes to Pue’s Occurrences blog btw), for being so much fun to work with.  Had the most brilliant time this week, will miss you all and look forward to keeping in touch online.