The Adventure Travel Film Festival, which took place from 11-13 August 2017, had been on my to do list for a few years now and I finally managed to pay it a visit. It is a film festival showing mostly independently produced outdoor, adventure sports and travel documentaries combined with camping just a tube and a bus ride away from Central London at Mill Hill School. The annual event, which also has sister festivals in Scotland  (September) and Australia (February), is run by adventurers and filmmakers Austin Vince and Lois Pryce and apart from the extensive film programme offers talks by well-known explorers, workshops (first aid on the road, medicinal plants, bushcraft, spoon whittling) and even motorbike trial lessons. 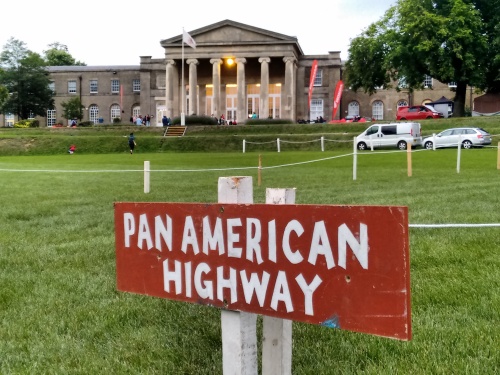 I managed to make it to two of the three festival days, but even though the films were repeated at different times it was really difficult to choose between them as they all sounded really enticing. Some of them also had filmmaker Q&As at the end, like Liemba (a journey on Africa’s oldest steamship), whose director Julie Clavier came over from Paris to present her film. The first film I caught was called Man with a Pram and featured Swedish adventurer and now family man Mikael Strandberg who set out on a two-month walking journey from Manchester to London together with his two-year old daughter Dana and assistant Georgia Villalobos. Alternating between staying with friends and acquaintances and wild camping along the way, the three encounter an intriguing cast of characters, old and young, friendly and odd, on their journey to figuring out what the English are really like as a nation. Definitely one to watch if you think travelling with children is (nearly) impossible, just put them in a pram, pack some nappies and off you go!

This was followed by a triple bill of shorter films: Kapp to Cape, a three-month high-speed cycle journey from Norway to South Africa by British Iranian Reza Pakravan; Two Bedouins, A Camel & An Irishman follows Leon McCarron and his local guide Musallem Faraj into the Sinai desert where they explore the fascinating landscape and learn about the traditional way of life of the nomads; In The Eyes of God Latvian extreme kayaker Tomass Marnics and a handful of his friends tackle the most dangerous rivers in remote Kyrgyzstan.

Unlike at most other festivals I’ve been to, the venue provided all the food (and I’m assuming they don’t allow outside vendors), so if you’re planning on attending the whole festival, I highly recommend booking your meal plan in advance (this covered cooked breakfasts on Saturday and Sunday as well as dinners on Friday and Saturday night). As I wasn’t staying the whole weekend, I brought my own snacks and supplemented them with coffees and sandwiches from the indoor café (plus there was a BBQ, which included veggie kebabs and veggie sausages, for extra food options). Talking of practical things, there was a shower and toilet block not too far from the camping areas as well as portaloos and indoor toilets in the venues and plenty of drinking water available. I also picked some lovely blackberries right behind my tent, which made for a delicious foraged snack.

After dinner, it was time to attend a talk and the one by native Sri Lankan Dylan Wickrama was very inspiring. He decided to tackle the Pan American Highway on his motorbike and build his own raft to cover the Darién Gap (where no road exists) between Central and South America, resulting in a 30-day solo boat journey (bike on board), which made for a profound experience, including meeting a pod of inquisitive dolphins. It was a beautiful story illustrated by videos and photos from the trip. 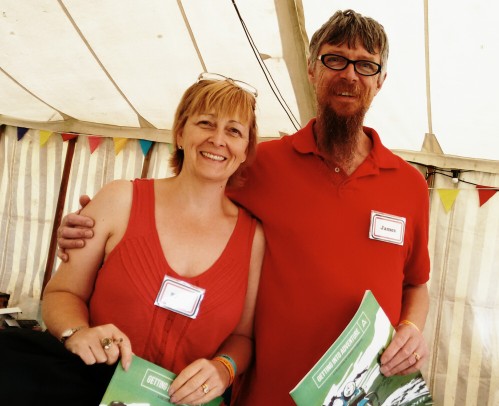 As the weather was quite windy and cloudy on Friday night, the Starlight Screening, which would have normally happened outside, was moved to the sports hall with hundreds of chairs set up for us. The whole festival was efficiently run by the organisers and dozens of friendly volunteers like Kathy and James, who checked me in on Friday afternoon. The feature on Friday night was called DugOut and was a film by and about Ben Sadd and James Trundle, who ventured into the Amazon enlisting a local man to help them fell a tree, turn it into a dugout canoe and then take it downstream for a river adventure. The film is a beautifully made testament to what can be achieved when you have an idea, follow through with it and are open to learning from the locals thereby discovering a whole new world and skills which our Western societies have largely lost.

After a lovely bluegrass live set by The Jolenes (including festival director and ace banjo player Lois Pryce) by the campfire on Friday evening and a peaceful night in the happy tent, the first sessions of the day started at 10am (sadly clashing with the morning yoga class). I picked the How to Make a Film of Your Adventure by festival director Austin Vince talk, who explained in an hour and a half the rules, pitfalls and ideas around making a TV-worthy travel and adventure documentary. So do remember to work with a shot list, vary your sequences (bits of story) and transitions (bits to link the parts of the story, i.e. maps, local flora and fauna, day counters with commentary and/or music), include children, older people and animals and aim to show interesting places, artefacts and experiences plus try and shoot only what you need. 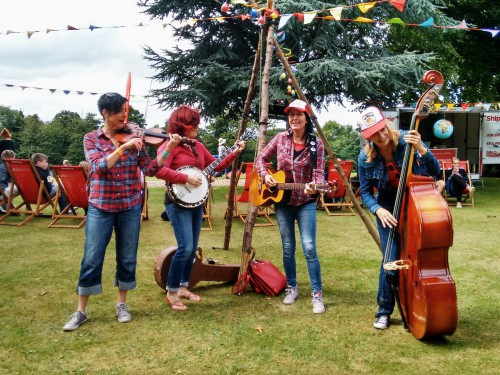 I also watched Paddle For The North, a Yukon canoeing adventure which, to my delight, included two puppies, Taiga (a golden retriever) and Zephyr (a wire-haired pointer), who made the already intriguing film even more fun to watch. I somehow managed to see a lot of water-based films during the weekend, another one was Rowed Trip describing Canadians Julie and Colin Angus’ seven months rowing and cycling trip from John O’Groats in Scotland all the way to Aleppo in Syria in 2008, particularly poignant to see given the current political situation.

The final event I attended was a talk by explorer Benedict Allen who, together with BBC Security Correspondent Frank Gardener in his wheelchair (he was shot by terrorists), embarked on a quest to see Birds of Paradise in Papua New Guinea. It was another good example of how having a dream and following through with it is what adventure is all about. And this is what this festival is really good at. Inspiring people to turn their dreams into an adventure, learn from the experts and just go for it. But don’t worry, you don’t have to be an adventurous type to enjoy the event. In fact, the festival was definitely on the quieter side and is suitable for families, more laid-back folks (many of them into motorbikes) and anyone with an interest in travelling and filmmaking.

Disclaimer: Life is a Festival was provided with a weekend pass for the 2017 festival in exchange for a personal review of the event and mentions on social media. Opinions expressed are those of the author and not necessarily the same as the official views of the event organisers. All photography used in this blog post was taken by Life is a Festival.