While it’s exciting to be at an event for the first time and discovering all its ins and outs, I love returning to a festival and being able to look forward to what I know will be a great music-filled weekend. Cambridge Folk Festival (28-31 July 2016) is one of those examples as it’s always impeccably organised and runs like clockwork, but at the same time has a friendly, laid-back vibe.

This year’s festival started for me in a very relaxed fashion as I had plenty of time on Thursday to set up the happy tent at Coldham’s Common, head into town to get supplies and then make my way over to Cherry Hinton Hall where the festival began as usual with Stage 2 and the Club Tent plus The Den swinging into action around 6pm. I decided to start with Imar, a fab inventive Glasgow-based five piece trad band with Scottish, Irish and Manx roots. After a veggie burrito dinner I headed over to The Den, a smaller stage with a cosy living-room feel which always hosts a number of exciting not so well-known bands. The first set I caught was by Bristol-based Heg & the Wolf Chorus, who call their mesmerising musical storytelling “theatrical folk music”. This was followed by the very energetic brother duo Echo Town, made up of Richard and Robert Harrison whose rhythm-based live show included didgeridoo, djembe, a drum set and guitar. It only took a few songs for the audience to realise this was the perfect opportunity to get up from the cosy rugs spread around the tent and start dancing their socks off, which we did!

After a quiet night at the campground, which again had everything one could possibly wish for, including good showers, a live music tent (more about this later) and food and drink until the early hours, I caught the official shuttle back to the festival site in the morning. I grabbed a coffee and some breakfast and started with a very relaxed songwriting workshop by Chris Wood. Then I headed over to the duck pond for a peaceful yoga and meditation session led by Teresa. A great start to the first festival day.

Although Friday had pretty mixed weather overall this didn’t dampen the spirits of the festival goers in the slightest given the enticing line-up across the three stages. This year featured a lot of excellent Irish artists, the first of which for me was Lisa O’Neill, who I’d seen in Dublin before and is one of those songwriters whose talent most definitely belies their age. The rest of the day was spent sampling the various musical offerings and finding new favourites including Americana duo The Mike + Ruthy Band, who are hailing from Upstate New York and even have their own festival, The Hoot. In the evening it was time for a set by Scottish singer-songwriter KT Tunstall on Stage 1 and I stayed on for Gogol Bordello, whose Gypsy punk sounds were a nice contrast to the more traditional acts who were on during most of the day.

On Saturday I started the day again with some excellent coffee and another songwriting workshop, this time by English folk revival superstar Eliza Carthy, who was just as entertaining, funny and thoughtful in a smaller setting as she was on stage with her 12-piece Wayward Band. The next highlight of the day lasted for nearly three hours as the Festival Session on Stage 2 hosted by Brian O’Neill was like a high-profile open mic with top musicians and newcomers (Le Vent du Nord, Världens Bänd, Sam Kelly, Jack Cookson, Kadia) passing the musical baton every few minutes, just fabulous! One of Saturday’s standout sets was by Leyla McCalla (formerly cellist with The Carolina Chocolate Drops) and band. Her repertoire and arrangements influenced by Cajun, Haitian and Creole music were simply beautiful. Another excellent Americana band, the Massachusetts-based all male quartet Darlingside, became one of the festival favourites over the weekend, having been given a Stage 1 slot at the last minute to replace Charles Bradley, who had sadly been taken ill. After a jam-packed day I was very excited to see Christy Moore on Stage 1. I hadn’t seen the iconic Irish singer, now in his early seventies, live since the 1990s and was pleasantly surprised that his classic songs sounded just as fresh and relevant as they had two decades ago. Ably supported by another excellent Irish musician, Declan Sinnott, as well as Seamie O’Dowd and Jimmy Higgins, it was probably my favourite set of the festival weekend. As much as I love folk music from all over the world, there is something about Irish music and voices that touch my heart in a way nothing else can. 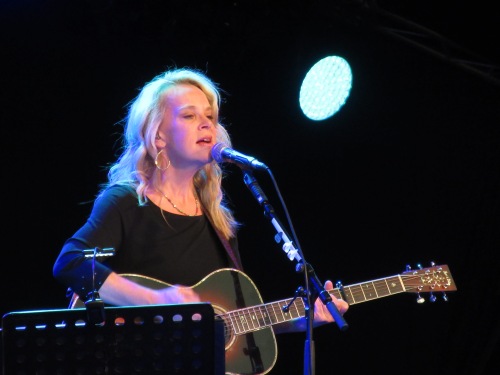 The last festival day always approaches way too fast and again I decided to take it easy and go for quality over quantity. Powerful all female five-piece Della Mae from Nashville were a must on my list and I hope they’ll bring their infectious brand of Americana back to the UK very soon. In the evening I greatly enjoyed Mary Chapin Carpenter’s set on Stage 1. It didn’t beat the singalong experience we had with Joan Baez last year, but having never seen her live before, I really enjoyed both her classic songs as well as her newer material and the stage banter in between. I then headed over to The Flower Garden to a fascinating workshop by US folk musicians Anna & Elizabeth who showcased their handmade “crankies”, miraculous scrolls either painted or sewn with fabric to illustrate the story of a sung ballad, a fascinating tradition which the duo have successfully dragged into the modern day and age. I, for one, have been inspired to give crankie-making a go myself over the winter months. Take a look at The Crankie Factory to learn more about them.

After a break for wood-fired pizza another Irish favourite of mine, Imelda May, took to Stage 1. While the Cambridge audience seemed to take a little while to warm to her very danceable rock’n’roll sound, her version of U2’s “All I Want Is You” with everyone joining in was the most beautiful moment of the set. I ended the night with Hot 8 Brass Band and the musicians from New Orleans seriously blew the proverbial roof off Stage 2. Their set concluded with a parade right through the audience over to the Mojo tent with everyone whooping and clapping along, what a festival finish!

But wait, the real highlight was still to come: the bus trip over to Coldham’s Common, which traditionally leaves the drivers free to go around the three roundabouts on the way as often as they want with happy passengers cheering along like excited school kids. Ah, the simple pleasures of life! I’d also like to give an extra special shout-out to the amazing late night bar tent at the campsite. The best afterparty at the festival, which even attracted some of the official CFF bands, such as Flats & Sharps for a late night set, just added that special extra to an already successful and well-organised event. Well done everyone!