Where Writers Come To Play: The Guardian Hay Festival 2009

Posted on June 20, 2009 | Leave a comment
The Guardian Hay Festival is to literature lovers what Wimbledon is to tennis fans. Founded in 1988 by Peter Florence in the market town of Hay-on-Wye deep in the Southern Welsh hinterland near the Brecon Beacons national park, it is attracting more people year after year. Nowadays around 80000 visitors make their way to the Welsh countryside every May to attend the over 300 events which include book readings and signings, discussions, film presentations, jazz concerts and a huge number of children’s events including workshops in a lovingly planted organic garden with real chickens. 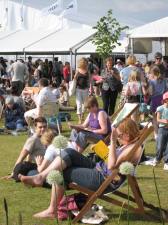 Hay visitors soaking up the sun in between readings

I had been wanting to go to Hay for ages, but while the programme was extremely tempting the way to get there was anything but! But I thought as with any other decent pilgrimage the journey should be (at least part of) the destination. So on Thursday morning I boarded a train from Cardiff taking me to Hereford where I took a shuttle bus (provided especially for the festival) to Hay-on-Wye. Duration of the journey: around 2 hours. Return tickets: a whopping £40. Accommodation was the next hurdle as every bed in the whole town and surrounding areas is completely booked months in advance. Luckily I found a campground which rented out tents including air mattresses for the night and, phew, it didn’t rain at all during the two days I spent there. 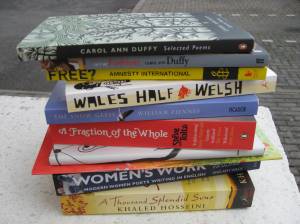 On an ideas wall provided by Sky Arts someone had jotted down a word he or she had made up which was 'Haystack - a pile of books bought at a literature festival staring at me from my bedside table'. This is my one 🙂

The festival grounds were located just outside of town (a ten minute walk or 2 minute bus ride, £1 for a day ticket) and basically consisted of a tent village centred around a large square grassy area with lots of deck chairs, three cafes/bars, a bookshop and various stalls selling anything from second hand books (surprise) to strawberries. I had been warned before but it still came as a bit of a shock that the festival seemed to attract a mainly white, middle-class, middle-aged crowd (including most of the volunteers), lots of families (Hay Fever children’s programme obviously a huge draw) and the odd group of students (who, like me, must have taken the train/bus option or hitched a ride with someone). At least students were able to save money by being able to reserve tickets for up to five reading events for free. Would be nice if that scheme were to include disadvantaged groups and unemployed as well in the future.
Some of the readings took place in huge tents that fit a couple of hundred people and I was glad to get a good spot close to the front most of the time. My personal highlight turned out to be the talk by Carol Ann Duffy (first ever female British Poet Laureate – it took a mere 390 years!) and Welsh National Poet Gillian Clarke. The lively mix of conversation and recitation was as mesmerizing as it was charming and funny. Two strong women who are both deeply rooted in poetic tradition and are at the same time bringing a fresh and very contemporary perspective to poetry – a type of poetry which has the ability to cross many boundaries, including age and gender. 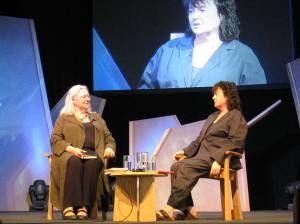 Gillian Clarke and Carol Ann Duffy at the Hay Festival

I also attended a few workshops by http://www.creative-choices.co.uk for aspiring and established writers and was pleased to catch the Desmond Tutu talk (tickets for which were 50 quid) for free on large TV screens in the cafe on site. It was also nice to have a chat with other literature enthusiasts and in the queue for the http://www.ageofstupid.net talk I even got to know a lovely couple who invited me to stay with them next year – I might just have to take them up on it! As Hay is the inofficial second hand book capital of the world boasting no less than 30 second hand book shops (quite impressive with a population of just under 2000), I am definitely going to be back for another festival season or at a more quiet time just to soak up the lovely smell of preloved books.

P.S. When I got back to my tent after the first day and had just cuddled up in my sleeping bag for the night I overheard a child proclaiming cheerfully to its mother while walking past the tent village ‘the grass is sparkling like hundreds of lights’. If that isn’t prove enough what positive influence a writing festival can have on all of us, I don’t know what else is.